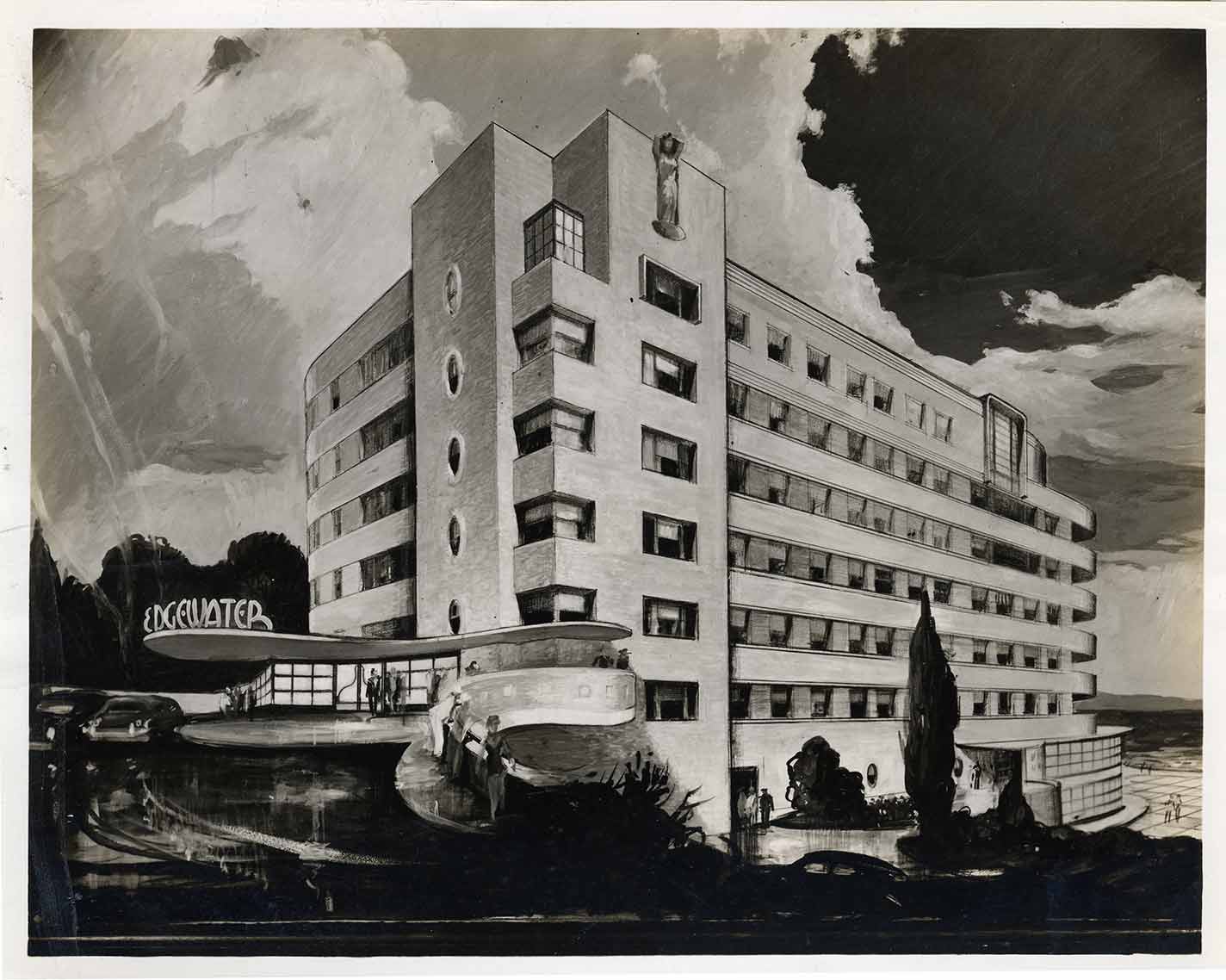 Madison’s Place for the last 75 years.

The Edgewater first opened its doors in 1948 and quickly became recognized as a prominent part of the Madison community and culture.

Sitting in the heart of the city, next door to the University of Wisconsin-Madison and steps from the State Capitol, The Edgewater served as the place to stay for Madison visitors and the city’s favorite place for waterfront relaxation, fine dining, dancing, and important meetings for more than 65 years.

Throughout the decades, The Edgewater has hosted an array of celebrities, including Elvis Presley, Elton John, Bob Hope, Bob Marley, and the Dalai Lama, to name a few.

The Edgewater renovation opened in September 2014, ushering in the next chapter of our history. Owned and operated by a team that lives in, and loves, their city, no effort was spared to showcase the property’s breathtaking views, offer unique amenities and focus on re-establishing their long-standing relationship – the city and its finest hotel. 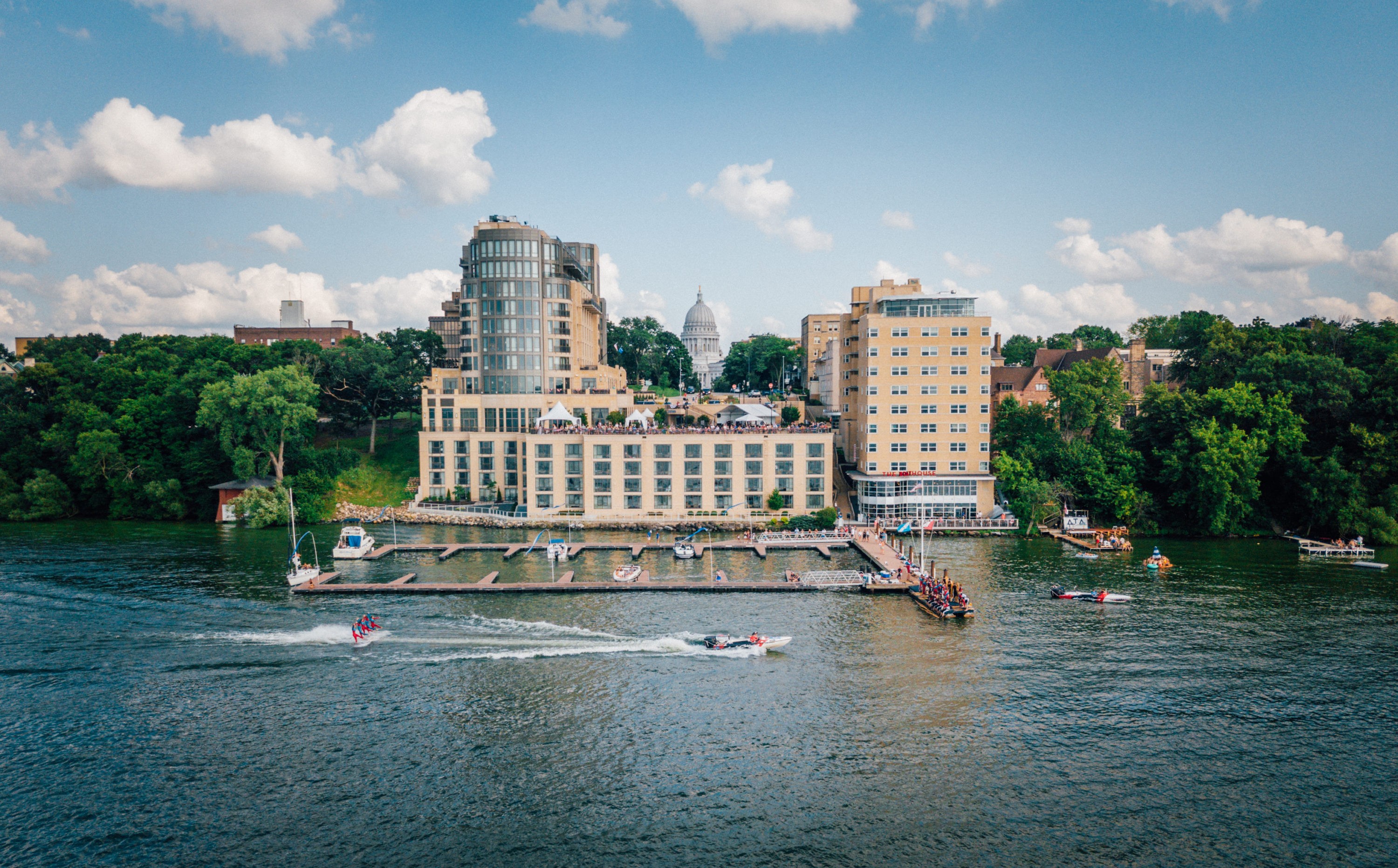 Celebrate our Diamond Anniversary with some sparkle!

Book an overnight package and experience the best of The Edgewater with our special, limited-edition anniversary packages. Spend the day exploring downtown Madison, dining in one of our delectable restaurants or relaxing in our day spa before settling in for a stay at our historic hotel.

We’re celebrating 75 years of being Madison’s Place! Join us for an overnight stay and experience our historical property in the heart of beautiful downtown Madison.

Experience the very best at The Edgewater, Madison’s Place for the last 75 years! In honor of our diamond year, we’ve curated the finest amenities throughout our historic property.

A walk through our 75 years of history.

The Quisling Brothers begin construction on The Edgewater Hotel’s original Art Moderne tower on Lake Mendota. The Quislings built two other buildings in the Mansion Hill District that share this distinctive design style: The Quisling Clinic and The Quisling Rooming House. All three buildings are significant historical structures in Madison and are located on Wisconsin Avenue. If you walk from The Edgewater to the state capitol building, you will encounter all three of these distinctive buildings on your stroll.

Construction Completed, Augie Faulkner, a recent graduate of the University of Michigan Hotel Administration School becomes the first general manager of The Edgewater Hotel. Augie was renowned for his hospitality and conviviality—which is why we’ve named the hotel bar in his honor.

The Quislings sell the property to Augie Faulkner.

The Edgewater is expanded for the first time with the Lakefront Addition, a five-story, low-rise structure at the end of Wisconsin Street. The addition added forty rooms, a ballroom, and a high-end restaurant—The Admiralty Room.

The Faulkner Family sells The Edgewater to the current owners—The Dunn and Frautschi/Rowland Families. Both families are local to Madison and active members of our community. The hotel closes for renovation and redevelopment to expand and modernize the property and restore it to its original place as Madison’s premiere hotel.

Fun Facts About The Edgewater

The Edgewater has hosted an array of celebrities, including Elton John, Elvis Presley, Bob Hope, Bob Marley, Joni Mitchell, and the Dalai Lama, to name a few. Since the restoration, we proudly present over 100 photos of celebrities enjoying their stays at the historic property in a multi-media presentation in order to provide our guests with a “living history” of the Edgewater and the City.

In 1977, Elvis rented out two entire floors of the hotel during his stay. One floor was for himself and his entourage and the other was kept empty to serve as a buffer from curious fans. The King even kept an Edgewater clothes hanger as a souvenir, which is on display at Graceland

Cyndi Lauper was inspired by the view from her hotel room and wrote the song, “Water’s Edge” while staying at The Edgewater in 1999 during a US tour with Cher.

The view from The Edgewater is inspiring!

The Edgewater’s Langdon Building is a prime example of Art Moderne—its original concept rendering featured rounded edges, round windows, long lines, and design elements that made the building look like a steamship on the ocean.

Construction costs changed during the war, and materials became more expensive. As a result, some of the ornate features of the hotel were cut including the grand entry, the glass bar/restaurant at the lakefront, and the top level of the hotel.

During the 2014 renovation, these features from the original plan were incorporated into the hotel.

The Wisconsin Building: A Nod to the Past

The Wisconsin Building was designed by architect David Manfredi, principal at Elkus Manfredi

to complement and give a “nod” to the original Art Moderne Langdon Building. The facade’s ship-like prow presides over Lake Mendota and provides stunning views year-round. The circular windows of the Langdon Building are echoed in the railings, the interior light fixtures and doorways.

2014 Restoration: A Love Letter to the City

The Edgewater has been Madison’s Place since 1948—and the renovations were designed to give the people who live, work and play here more access to the lake. Opening the waterfront and creating a public space at the terminus of Wisconsin Avenue was part of the Nolan Plan – the city’s original planning document – and an important part of bringing the vision of The Edgewater Hotel to completion.

The project reopened the street end of Lake Mendota and increased public access to the waterfront via a staircase to the lake, a public pier, and a boat launch. The Lakeside Addition’s top level was removed to create The Grand Plaza, where The Edgewater hosts concerts, ice skating, and many other special events in Madison.

The renovation restored damage that the Langdon Building had sustained since 1948 and also incorporated the architectural features that were not added during the 1940s due to wartime materials shortages and costs.  The renovation also included the interior of the building, which has been redecorated with details that evoke the Art Modern era.

Celebrating the people who made it possible.

The place for everything Madison,
then & now.

From monthly walking tours that explore the history, architecture, and personalities behind The Edgewater and its neighborhood to special events all year long — we’re splashing out on celebrating! Join us and become part of The Edgewater’s story.

Valentine’s at The Statehouse