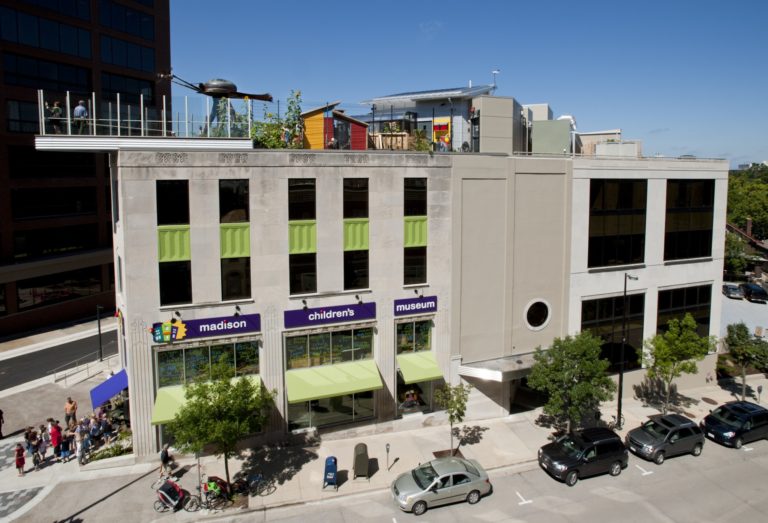 If you take your kids to the Madison Children’s Museum, they may never know or care that it’s been honored as one of the nation’s best museums of any kind. They’ll be too busy. Having too much fun. Making too much cool stuff. In short: If you’re in Madison with children, you’ve gotta go.

Even before you get inside the Madison Children’s Museum (MCM), you can see it’s a cool place: its unique wedge-like shape, a strange collection of faux road signs near the door, a full-scale log cabin out back and some intriguing shapes peaking above the roof line.

Since moving to its new location a stone’s throw from Madison’s Capitol Square, MCM has earned — among a long string of accolades — the National Medal for Museum Service from the Institute of Museum and Library Services, the nation’s highest honor for museums and libraries.

Here are 6 features that make MCM a one-of-a-kind experience for children and adults alike: 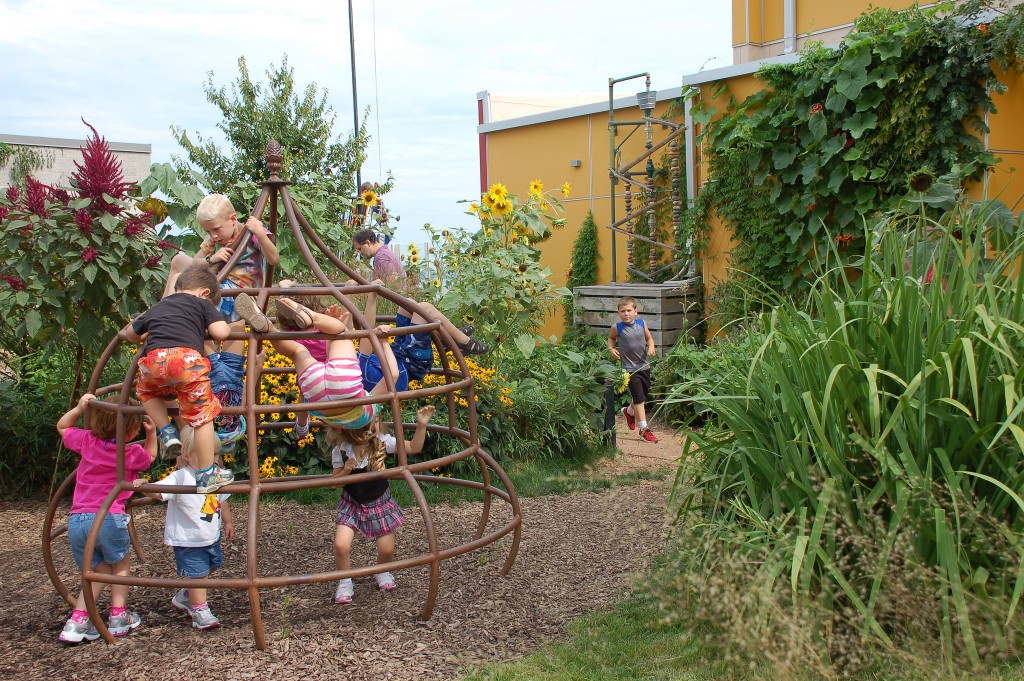 1. A Hands-On Guide to What Makes Wisconsin Awesome

The best children’s museums are unique to their place on Earth. They convey what is special about their homes — and they do it in interesting and fun ways.

Now, you might think a big ol’ cow is kind of (ahem) a cheesy symbol of the

capital city of America’s Dairyland. But how about a giant cow in a harness that kids can raise and lower on interactive pulley systems from the third story to the first, along with a bunch of other dairy-related sculptures?

And that’s just scratching the surface.

All the displays and activities are custom designed for this space. Special programs that change day-by-day and season-by-season give visitors hands-on fun with animals, plants, and materials unique to our city and state. 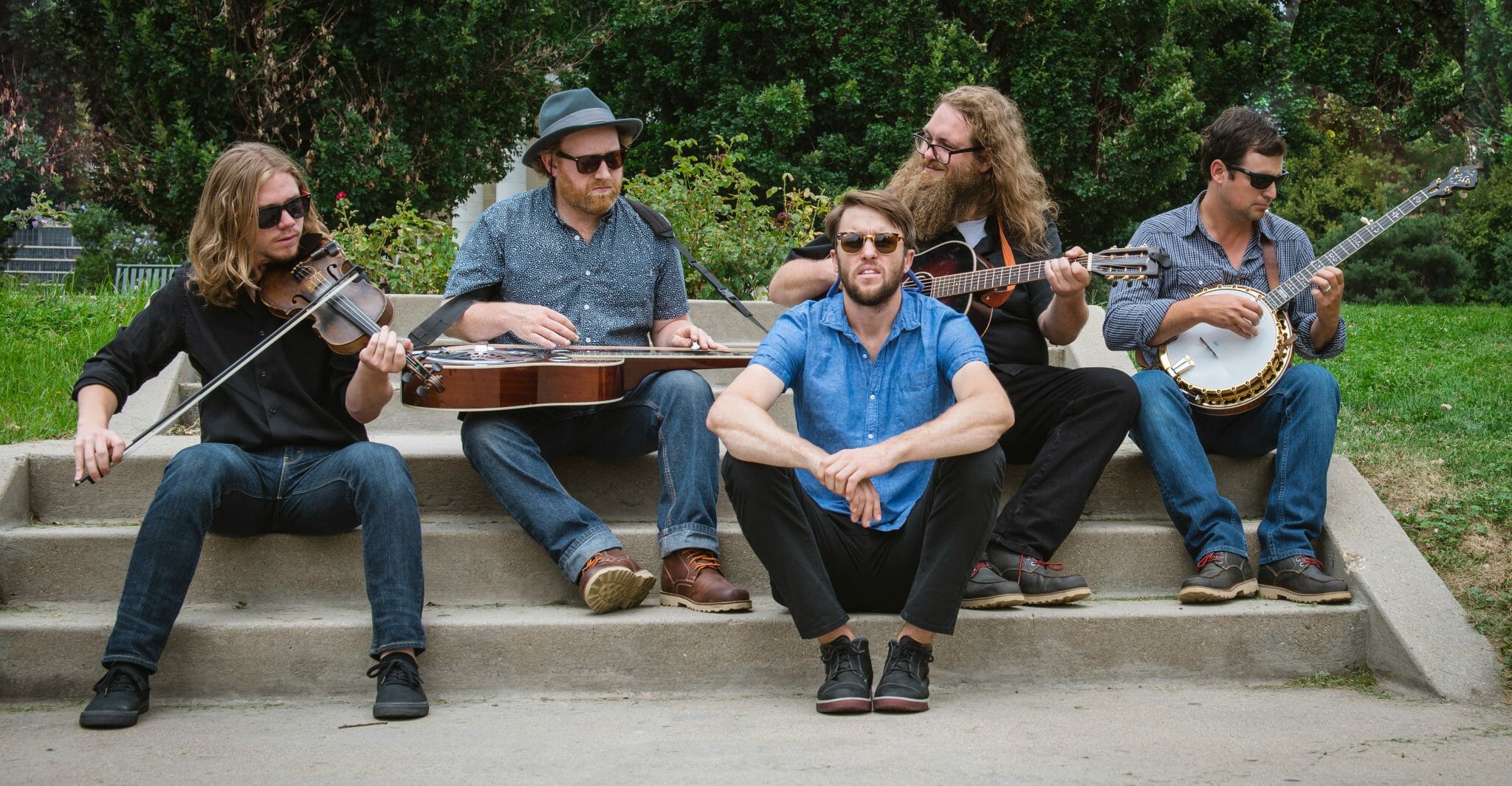 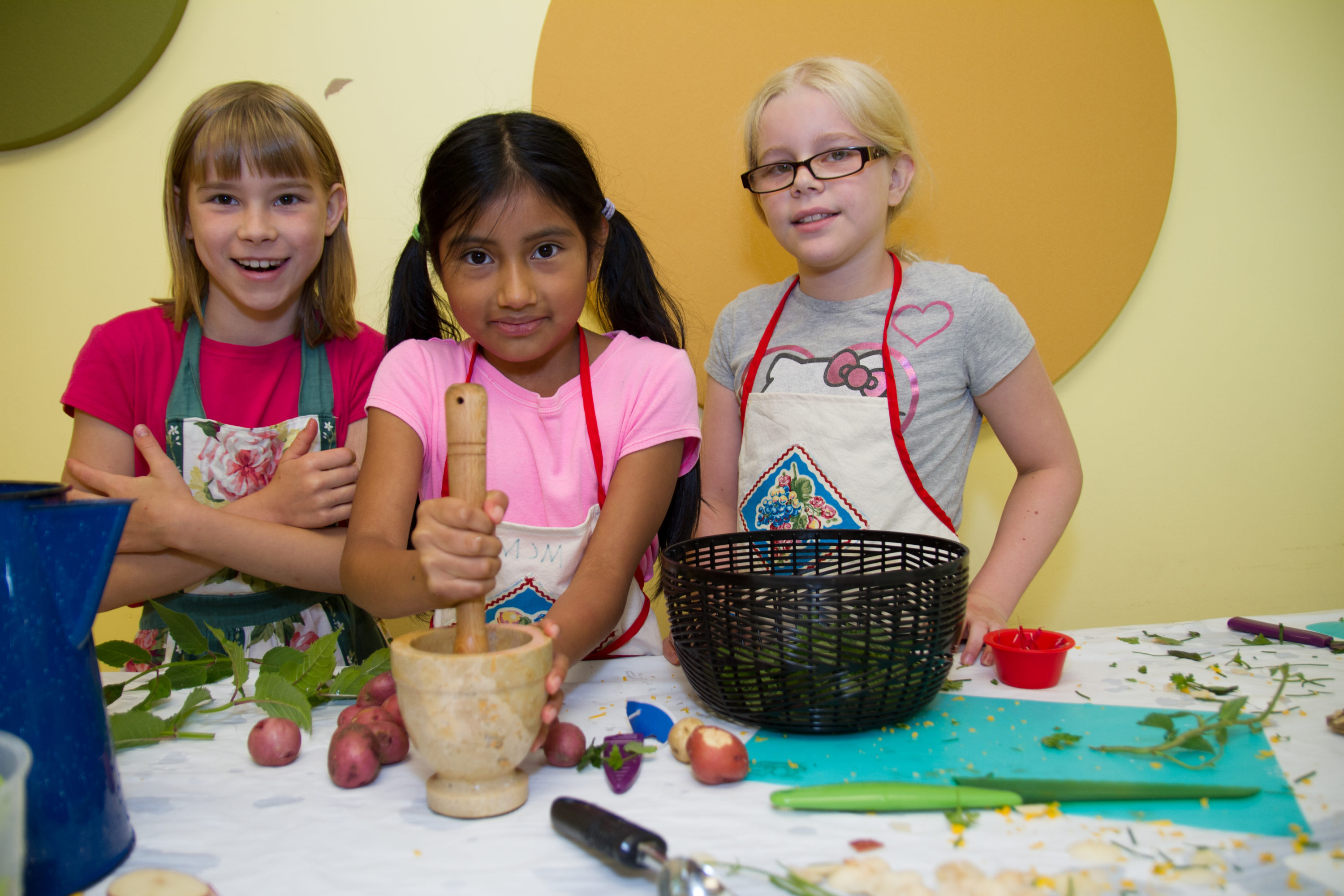 Lots of kids go to one-day pottery workshops and take painting or dance classes, but at MCM, they can dabble in many different arts and crafts on the same day if they want to. They can see what floats their boats (literally, in some cases) and what they might like to explore further.

3. Find Friends in all the Right Places 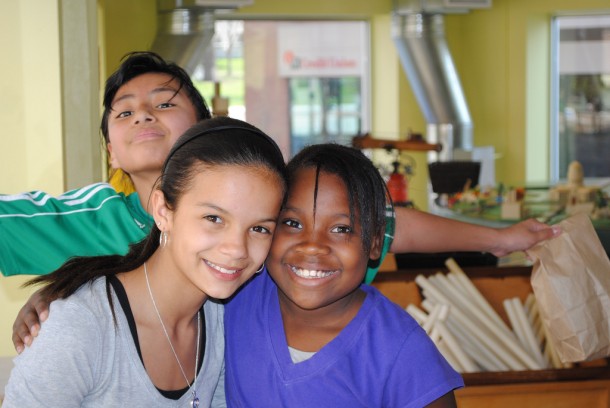 Wherever you’re from and whatever background, interests, or inclinations your children have, chances are at MCM they’ll wind up playing with, and learning from, people they’ve never met. And that’s no accident. MCM’s displays and activities are designed to promote fun, imaginative problem-solving and teamwork.

4. Fun for Crawlers to Climbers 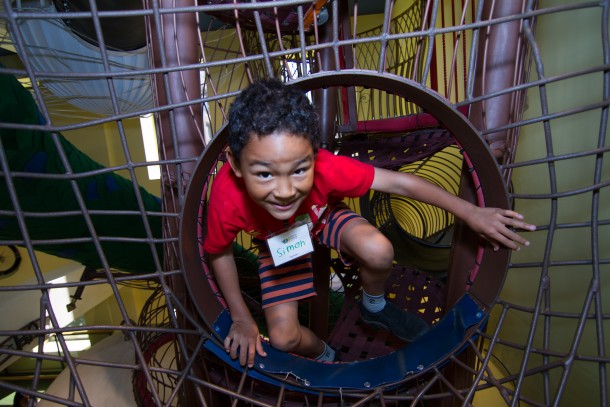 Most MCM exhibits are designed for ages 0 to 12, but people of any age will find wonderful things to do.

Say you bring along a toddler and a teen. Toddlers will find amazing shapes, textures, and spaces that will keep them moving and stretching their abilities, while teens (and parents) have an excuse to try all the intricate, interactive mechanical devices, building materials, and more.

Let’s put it this way: You don’t see many folks playing Angry Birds on their cell phones in this place.

5. The Adventure Without the Risk (But Don’t Tell the Kids That)

Everything about MCM is designed for its visitors’ safety, right down to the building materials. The facility has earned the LEED (Leadership in Energy and Environmental Design) Gold Certification, which requires non-toxic, sustainable materials, among many other things.

Exhibits like the ginormous climbing structures give kids the chance to safely explore — and improve — the limits of their physical abilities.

6. People Who Know What’s What About Kids

President/CEO Debbie Gilpin, who has spent nearly 30 years working with children’s museums, joined MCM in 2013. She held the same position for nine

years in the Children’s Museum of Phoenix, a museum she helped create and launch. (Read the Q&A with Debbie below.)

Gilpin leads a staff of educational specialists, designers, and builders who create MCM’s exhibits and ever-changing menu of programs, sometimes with help from UW-Madison researchers. And with help, of course, from kids: the ultimate arbiters of what makes a great children’s museum.

These are only six of the reasons you and your children will love the Madison Children’s Museum. There are plenty more. Come find out for yourself.

If you’ve been to some children’s museums in years past, you may still think of them as daycare centers on steroids: splashed in relentlessly cheerful primary colors with a vast menagerie of plastic animals and science/industry-themed toys. A few well-worn historical exhibits.

Now, take one step into the Madison Children’s Museum (MCM) and see what a children’s museum should be.

President/CEO Debbie Gilpin, who joined MCM in 2013, has worked for children’s museums for nearly 30 years. After a nine-year stint running the Children’s Museum of Phoenix, which she helped found, Gilpin returned to her hometown of Madison, where she graduated from the University of Wisconsin-Madison.

The Edgewater (TE) asked her some questions about what makes MCM a special place to work and to visit.

Debbie Gilpin (DG): The best children’s museums around the country are unique to their places.

The Madison Children’s Museum is very much about Madison and Wisconsin, and what it’s like here. We don’t look like any other children’s museum. All our exhibits are our own inventions–that makes it a unique experience.

Also, in a great children’s museum, everyone’s included in the fun, from adults down to the babies.

One of the favorite comments we hear repeatedly is how much fun adults have here. Tens of thousands of visitors every year are adults coming for private parties, weddings, anniversaries, corporate gatherings — not just with children.

The “Adult Swim” events we host are getting quite famous in Madison.

TE: How do you create exhibits that engage babies and toddlers?

We also want these spaces for pre-schoolers to blend with things for older kids and even adults.

For example, the “ball run” on the first floor by the elevators: When the babies are there — sometimes while an older sibling is playing there — the babies are just dropping the balls in a trough and the middle-level child is just watching the ball run down the track.

Meanwhile, an older child is laying out more track, setting it up so the bells ring and little chimes get knocked around — or they’re seeing if they can make the ball come off the track. And then we’ve got adults who lay out these REALLY complex tracks, where the ball can stay in play for a couple of minutes.

That’s what a well-designed exhibit will do. It lets you bring whatever you want to do to it, see how it’s going to turn out, and have that kind of play and interaction. And there are just so many things in a child’s life where they don’t get to do that anymore.

TE: It does seem like most of the toys and activities for kids today need to be done in a certain way, doesn’t it?

DG: With so many of today’s toys, there’s a guaranteed outcome. Or if something breaks, the child learns very quickly to say, “It’s not ME, it’s not because of something I did, it’s because IT is busted.” So, they’re learning to absolve themselves of the responsibility of figuring it out.

That’s why the play in our museum is so open-ended, so they can figure things out for themselves. We’re trying to teach them to experience two things in their bodies: patience and persistence.

And that’s actually why adults also love this open-ended experience, because they get to experiment with things, too.

TE: What’s your favorite thing that parents tell you about MCM?

DG: “That place saved my life when my kids were little.” And I know what they mean. We hear from so many parents that every day their kids wake up and say, “Can we go to the museum today?”

And what’s great for parents is, they know the children will be happy and it’s going to be good for them. They might learn about music, history, math, animals, or something about the environment — whatever their child chose to explore that day. We hear that message a lot.

The other thing we hear is about their child learning social skills. I had a father whose toddler was three tell me they lived in a neighborhood where there aren’t many other children. And he said to me, “We come here so she can learn how to be a friend.”

TE: Is it especially important for children visiting from out of town to be able to find a new friend, even for a couple of hours?

DG: Yes, and when kids are traveling, they get dragged along a lot. “We’ve gotta get to the airport now,” or “It’s time to go to dinner now.” Or they have to go where a lot of adults are getting together, like a wedding, and there may not be other kids to play with.

But look at kids in a place like our “Possible-opolis,” where, among many other things, they can build things like huts together. Kids of all ages find all kinds of building materials and they’ll often end up playing with people they don’t know.

No matter what a person’s background or abilities are, they have a starting place here. And chances are they’ll end up playing side by side with someone who has a very different background and very different experiences. And together, they’ll solve problems.

TE: Some of the most popular exhibits at MCM involve living things. What can kids learn there about animals and plants?

DG: We have a balcony with an animal hutch, with rabbits, quail, and other animals. The animals come out and the kids get to handle them and learn about them. We have homing pigeons on the roof, too, along with chickens.

In our “Urb Garden,” kids learn about sustainable gardening. There’s a worm bin, a compost bin. Kids can pick out their own worms and feed the animals, or they can water the plants, help trim them.

The plants are all edible or usable: lettuces, peas, strawberries. There’s a solar oven, too, so the children can take what they see growing and turn it into something to eat.

We can see how many kids really don’t know the whole earth-to-mouth process. So it’s great anytime they realize, “Oh my gosh! This is how that happens!” or “This is how a lettuce leaf really looks.”

And then they put some greens they’ve picked into a little omelet — using eggs from the chickens on our roof — and they eat it. So, they take part in the whole process.

We have a hydroponic fish tank, so they can see how to grow plants without soil in a completely sustainable ecosystem. There’s also an area where kids can pot their own seeds and plants and take them home.

We’ve also got little child-sized brooms and sweeper bins. Because what some kids want to do is just sweep.

TE: Really? They WANT to sweep up?

DG: Sure. And this is a place where we see parents let their children be the leaders and do what they want to do.

So, when a child is doing something like sweeping, they’re obviously mirroring what adults do. But if you think about what your body does when you sweep, you’re using big motor skills across different sides of your body, you’re using your fine motor skllls in your fingers to move the broom around, you’re improving your balance, and you’re making decisions about where you’re going to go and why.

All these pieces come together so that children can do what we need them to do, which is to do what they feel like doing. We need time where we don’t say “Do this,” time when children can make their own decisions and find their own paths.