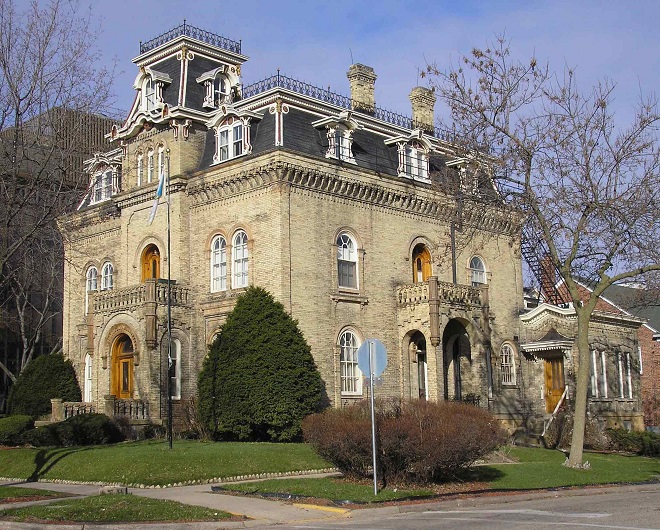 Far too few of the elegant and elaborate homes built in the mid-1800s by Madison’s original power elite remain standing today. That’s what makes The Edgewater’s neighborhood, the Mansion Hill Historic District, such a great place for a walk, or even better, a guided tour.

If you love history, classic and rare architecture, gorgeous homes and gardens, and dudes named Napoleon Bonaparte, you will enjoy the Mansion Hill tours run by Madison Trust for Historic Preservation.

Mansion Hill is the ridge that runs along Lake Mendota, roughly a block or two from the University of Wisconsin’s Memorial Union Terrace at the west end, to its high point on The Edgewater property, down to James Madison Park on the east end.

That’s a truly glorious stretch of lakefront. And being so near the State Capitol Building, it was a natural spot for the burgeoning upper class of Madison to build their homes and businesses beginning in the 1850s, when Madison was just a town of less than 7,000 or so.

Michael Bridgeman, one of the Madison Trust for Historic Preservation’s volunteer docents who lead walking tours of Mansion Hill, told us about some of the neighborhood’s most interesting places and people.

German immigrant August Kutzbock put a huge stamp on the fledgling state capital in the 1850-60s.

“Kutzbock was an architect of real talent and importance,” Bridgeman says. “The most important buildings he designed in Madison, unfortunately, are demolished: a City Hall building, and the second State Capitol Building, which burned in 1904 and was replaced by the current building.”

The Mansion Hill Historic District still boasts six Kutzbock-designed buildings which have been lovingly maintained and/or restored. You can see his distinctively ornate, German-influenced Romanesque Revival style in some, and his version of the classic Italianate style in others.

Alas, after leaving Madison for three mostly ill and unproductive years in San Francisco, he returned but couldn’t reboot his business and fell into despair. He drowned himself in Lake Mendota in 1868 at age 54.

This is Bridgeman’s favorite character from Madison’s early boom years, “partly just because of that name,” he admits. But Van Slyke was indeed a key figure in transforming Madison from the village he moved to in 1853 into the thriving city where he died 55 years later.

Van Slyke arrived from New York with a pot of other people’s money to invest, and made himself into the most prominent banker in town. He also represented the district including Mansion Hill in the City Council for many years and served on the UW Board of Regents.

He spawned a scandal or three with some questionable use of the state’s money, but in the end he remained an influential, popular community leader.

On Mansion Hill, Napoleon Bonaparte Van Slyke (sorry–just gotta use that whole name again) commissioned none other than August Kutzbock to design a distinctive, opulent home he never moved into.

Instead, he bought another Kutzbock-designed Italianate home nearby, now called the “Van Slyke House.”

A Triangle of Art Moderne Style Classics, Including The Edgewater

Bridgeman points out that the names of many of Mansion Hill’s original residents appear throughout Madison today, on street names, businesses, clinics, schools–even a sports stadium (Breese Stevens).

One of the influential families whose name still resonates in Madison is Quisling.

Doctor Andreas Quisling and his family built three Mansion Hill buildings, all designed by architect Lawrence Monberg in a style called Art Moderne (or Streamline Moderne), which some consider a variant of the Art Deco style.

This style is a modern contrast to the more ornate feel of the neighborhood, featuring smooth, curved lines, light colors, and nautical themes like porthole windows.

You know those those gleaming, tubular Airstream camper trailers you still see on highways and campgrounds? That’s one the many influences of the Art Moderne style on American product design in the 1930s and ‘40s.

The style certainly changed the vibe of Mansion Hills.

The three buildings form a triangle from the lakefront down Wisconsin Avenue straight toward the State Capitol Building, which makes the views from these properties spectacular.

Walking Tours of Mansion Hill
(and Other Cool Madison Neighborhoods)

Mansion Hill walking tours are divided into East and West tours, running from June through September. They cost $10 per person.

The other walking tours run by Madison Trust for Historic Preservation are:

Find more details about these tours and special tours you can book at the Madison Trust for Historic Preservation website.

Wisconsin State Journal Article on Summer Events at The Edgewater!